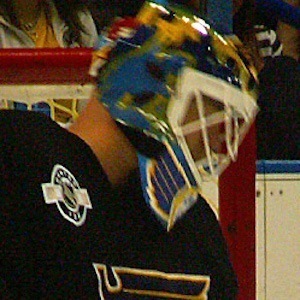 Former hockey goaltender who was known for his international playing career throughout the NHL and Europe. He played three stints with the Nashville Predators, with whom he began serving as a color commentator during the 2015-2016 season following his retirement.

He played junior hockey in the Western Hockey League as a member of the Prince George Cougars. He was subsequently selected 122nd overall in the 1995 NHL Draft by the New Jersey Devils.

He appeared as the starting goalie for the St. Louis Blues in 2008 and 2009, where he posted career-highs in wins and game appearances. He earned a gold medal as a member of the Canadian team at the 2007 World Championships.

He was born and raised in Red Deer, Alberta, Canada.

He and Dustin Byfuglien both signed lucrative contracts with the Atlanta Thrashers during the summer of 2010.