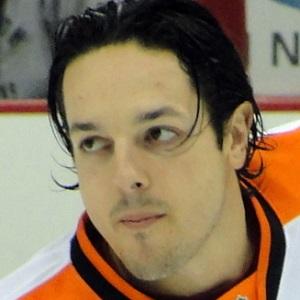 NHL center who led the league in playoff points during the 2010 Stanley Cup Playoffs as a member of the Philadelphia Flyers.

He played three seasons in the Quebec Major Junior Hockey League before making his NHL debut with the Phoenix Coyotes in 1997.

He fathered three sons, Caelan, Carson, and Cameron, with his ex-wife Sylvie Briere.

He won a World Championship gold medal with Martin Brodeur in 2004.

Daniel Briere Is A Member Of