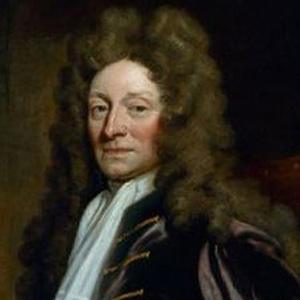 Rebuilt 52 churches in London following the Great Fire in 1666, including St. Paul's Cathedral on Ludgate Hill. He was also responsible for the Royal Naval College, Greenwich, the south front of Hampton Court Palace, and the oldest academic building still in continuous use in the United States: the College of William and Mary's Wren Building.

He studied Latin and Aristotelian physics at Wadham College, Oxford, in 1650. Besides architecture, he was also skilled in astronomy, geometry, mathematics, and physics. He was a member of the Wilkins circle, which laid the foundation for the Royal Society for which he served as president from 1680 until 1682.

He was knighted on November 14, 1673, following his departure from the Savilian chair in Oxford.

His parents were Mary Cox and Christopher Wren, Sr., who was the rector of East Knoyle and Dean of Windsor. He married his childhood neighbor, Faith Coghill, in 1669, with whom he fathered two children: Gilbert and Christopher. His wife died in 1675. He then remarried in 1677 to Jane Fitzwilliam, William FitzWilliam, 2nd Baron FitzWilliam's daughter, with whom he had Jane and William. She died in 1680.

His work was praised by Sir Isaac Newton.

Christopher Wren Is A Member Of