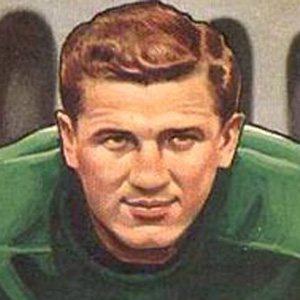 Hall of Fame Philadelphia Eagles linebacker and center, who was known for his aggressive tackling. He was also the NFL's last full-time two-way player.

He flew on 30 combat missions while a member of the United States Army Air Force during World War II.

His parents were Slovakian immigrants. He studied in Pennsylvania at a Slovakian language parochial school.

He and his wife, Emma, surpassed the 60-year mark of marriage.

He laid the hit on Giants running-back Frank Gifford that knocked Gifford out for 18 months.

Chuck Bednarik Is A Member Of