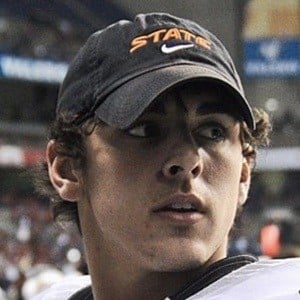 American football player who is best known as the former starting quarterback for the Oklahoma State Cowboys football team. In the 2013-2014 season, he led the Cowboys to a 10-win season and berth in the Cotton Bowl. The team ultimately lost to conference rival Missouri.

He attended and graduated from Enid High School in 2009. He was awarded a full scholarship to play football at Oklahoma State University during his senior year.

He is one of three children, born to Randy and Donna Chelf. His brother, Colton, also played football at Oklahoma State, while his sister, Courtney, played basketball for the Cowboys.

His coach during his tenure at Oklahoma State, Mike Gundy, also played quarterback for the Cowboys from 1986 through 1989.

Clint Chelf Is A Member Of