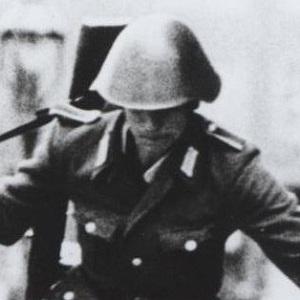 Best remembered for jumping over the Berlin Wall into West Germany during the wall's 1961 construction, he became a symbol of defiance against Cold War Era-oppression. Prior to his legendary leap, he had served as a soldier in the East German Army.

At the age of eighteen, he joined the Bereitschaftspolizei (the East German State Police).

Peter Leibing, a prominent German photographer, captured Schumann's defection from East to West Germany. The resulting image became one of the most famous visual representations of the Cold War era.

He settled in Bavaria, West Germany, with his wife, Kunigunde.

Nearly three decades apart, he and German aviator Mathias Rust both challenged the Cold War world order: Schumann crossed the border from East to West Germany in 1961, while Rust illegally landed his plane in Moscow, Russia's Red Square in 1987.

Conrad Schumann Is A Member Of