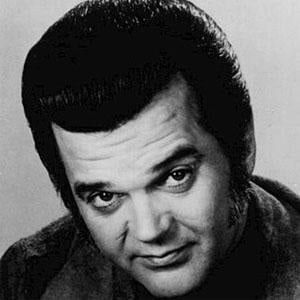 Country superstar who recorded fifty-five singles that reached #1, including "I Can't Stop Loving You" and "Hello Darlin.'" He was inducted into the Country Music and Rockabilly Halls of Fame.

Twitty formed his first singing group after his family moved to Helena, Arkansas. He had the opportunity to play baseball professionally with the Philadelphia Phillies, but was then drafted into the US Army.

Seth MacFarlane has incorporated old videos of his performances into episodes of the show Family Guy, a bit that became something of a running gag.

He and Loretta Lynn won several awards for their work as a duet.

Conway Twitty Is A Member Of