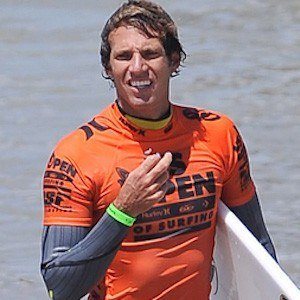 Surfer who is best known for his prolific career in the ASP World Surfing circuit. He is also known for his goofy-footed riding style, where he places his right foot forward on the surfboard.

He began surfing around the age of 2. He began competing as an amateur, pre-professional in the Eastern Surfing Association (ESA).

He has won the X Games gold medal on multiple occasions. He also won his 2nd recognized ISA championship at China in 2012. He has achieved the #1 ranking on the WSL World Tour worldwide rankings in 2001.

He was born and raised in Dunedin, Florida.

He has competed against Kelly Slater on the ASP World Tour circuit.

Cory Lopez Is A Member Of