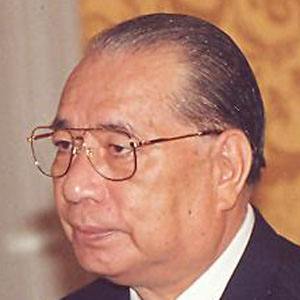 Entrepreneur, teacher, and religious figure who founded Soka Gakkai International, a lay Buddhist group with millions of followers. He served as president of Soka Gakkai, the original, Japanese chapter of the organization, from 1960 to 1979.

He joined the Japanese Soka Gakkai organization when he was in his late teens and subsequently became a youth leader within the group.

He received more than three hundred honorary doctorates and published numerous books on topics of interest to the international Buddhist community.

He has been criticized for his close friendship with and potential financial ties to Panamanian dictator and drug trafficker Manuel Noriega.

Daisaku Ikeda Is A Member Of