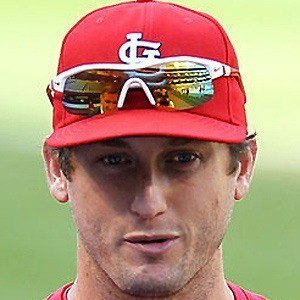 MLB third baseman who propelled the St. Louis Cardinals to a World Series Championship in 2011. He was traded to the Los Angeles Angels prior to the 2014 season and to the Pittsburgh Pirates in 2016. In 2018, he would sign with the Los Angeles Dodgers.

He turned down a scholarship to take a year off from baseball after graduating from Lafayette High School in Wildwood, Missouri.

He was born to Guy and Lynn Freese. In 2016, he married Mairin Freese.

He won the 2011 World Series alongside star slugger Albert Pujols, then rejoined Pujols on the Angles about two years later.

David Freese Is A Member Of