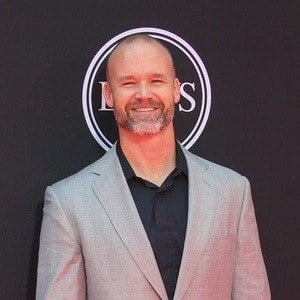 Retired MLB catcher who helped the Boston Red Sox capture the 2013 World Series Championship after spending the first decade of his career as a journeyman catcher. He won his second World Series title with the Chicago Cubs in 2016.

He played college baseball at the Auburn University and at the University of Florida.

He was selected in the 19th round of the 1995 MLB draft by the Los Angeles Dodgers and made his MLB debut on June 28, 2002. He played for a total seven teams in his career.

He was born in Bainbridge, Georgia. He married Hyla Ross and has children named Landri, Cole and Harper. Following his divorce, he began dating actress Torrey Devitto.

He became teammates with second baseman Dustin Pedroia on the Red Sox in 2013.

David Ross Is A Member Of