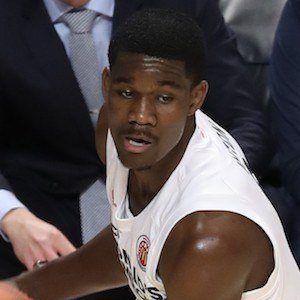 Center who was selected first overall in the 2018 NBA Draft by the Phoenix Suns. He played one year of college basketball at the University of Arizona.

He grew up playing the tuba and was scouted by The All Bahamian Brand before he began playing basketball. He later moved to San Diego, California.

He played in the Jordan Brand Classic and McDonald's All-American Game after averaging 26 points and 15 rebounds at Hillcrest Prep Academy in Phoenix, Arizona.

His parents are Alvin and Andrea Ayton. He has four siblings.

He played alongside Chase Jeter at the University of Arizona.

DeAndre Ayton Is A Member Of