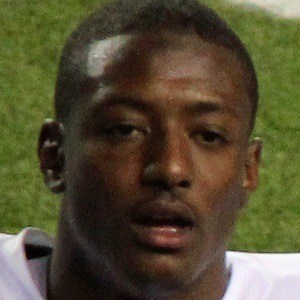 Football player who is known for his tenures with various NFL clubs and career at the University of Miami. He participated in Miami's athletic's program as a dual-sport athlete in track and football.

He attended Monsignor Edward Pace High School in Miami Gardens, Florida. While there, he became an accomplished sprinter and football player. During his senior season, he was ranked as the #16 athlete and #21 player in Florida by recruiting website Rivals.com.

During his senior season at Miami, he ran on the 4x100 relay team that advanced to the NCAA semifinals. During the 2011 NFL combine, he ran a 4.28 second 40-yard dash, which at the time was tied for the 4th fastest since recording times began in 1999. He was drafted by the Oakland Raiders in the 3rd Round of the 2011 NFL draft.

He was born and raised in Miami, Florida. His cousin, David, also played collegiate football at Tennessee State.

DeMarcus Van Dyke Is A Member Of