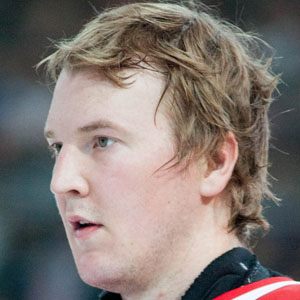 NHL goalie who began his career with the Edmonton Oilers after being the 14th overall pick in the 2004 NHL Entry Draft. He joined the Minnesota Wild during the 2014-15 season and his stellar play helped lead the team to the postseason.

He was the Canadian Hockey League's 2004 Scholastic Player of the Year.

He won a gold medal for Canada at the 2006 World Junior Championships. He earned the Masterton Trophy for dedication and perseverance for his accomplishments during the 2014-15 season.

He was born in Saskatchewan, but grew up in Alberta. He married Jennifer Dubnyk in 2012 and he has a son named Nathaniel.

He was teammates with winger Taylor Hall on the Oilers.

Devan Dubnyk Is A Member Of