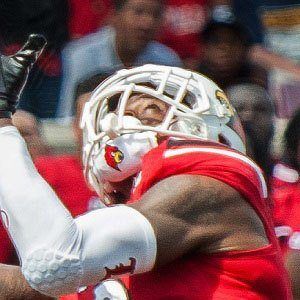 Wide receiver who starred for the University of Louisville Cardinals from 2011 to 2014. He totaled 156 receptions, 2,775 yards and 33 touchdowns in his four collegiate seasons and was selected 14th overall in the 2015 NFL Draft by the Miami Dolphins.

He was a 2-time All-State selection as a wide receiver at Ballard High School in Louisville, Kentucky. He also competed in track and basketball for the school.

His 12 touchdowns as a junior in 2013 led the American Athletic Conference and were 10th most amongst the entire NCAA.

His father Anthony Shelman played running back at Louisville. His mother's name is Raneca Parker.

He caught passes from quarterback Teddy Bridgewater during his first three years at Louisville.

DeVante Parker Is A Member Of