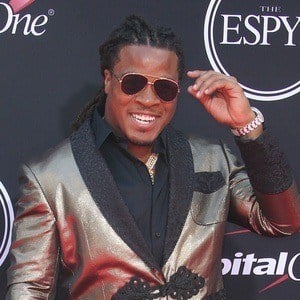 Running back who was a fourth-round draft pick of the Atlanta Falcons in 2014. He helped the team reach Super Bowl LI in 2017. During his time at Florida State, he won the 2013 BCS National Championship and two ACC Championships.

While playing football for Miami Central High School, he led his team to a state championship title and was voted MVP.

He earned his first Pro Bowl selection in 2015 after leading the NFL in rushing touchdowns with 11.

He was born and raised in Baxley, Georgia. He began wearing #24 in honor of his late aunt Tamekia N. Brown, who was 24 when she passed away.

He became teammates with fellow running back Tevin Coleman in Atlanta.

Devonta Freeman Is A Member Of