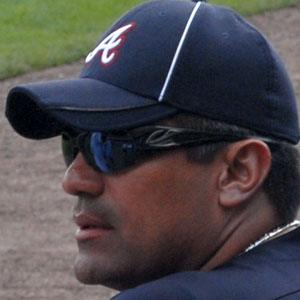 Former MLB catcher best known as a member of the Atlanta Braves, with whom he won the World Series in his rookie season in 1995. He later became the bullpen coach for the Braves in 2007.

He was born in Ciudad Ojeda, Venezuela and was signed by Atlanta as an amateur free agent in 1986.

He was named Most Valuable Player of the National League Championship Series with the Braves in 1999.

He has a daughter named Maried.

He was the personal catcher for Baseball Hall of Famer Greg Maddux during his time as a player for the Braves.

Eddie Pérez Is A Member Of