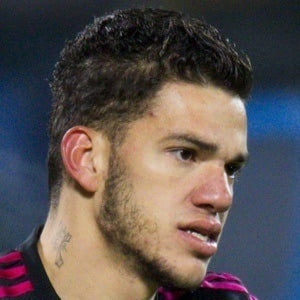 Brazilian goalkeeper who made his senior debut with Ribeirao in 2011. He went on to play for Rio Ave and Benfica. In 2017 it was announced that he had been acquired by Manchester City for €40 million making him the second most expensive goalie of all time.

He started his soccer career with São Paulo FC in 2008.

He became a member of the Brazil national team in 2017.

He is originally from Brazil; but gained Portuguese citizenship in 2016. He has children named Yasmin and Henrique with his wife Lais.

He and Andreas Samaris both played for Sport Lisboa e Benfica.

Ederson Moraes Is A Member Of