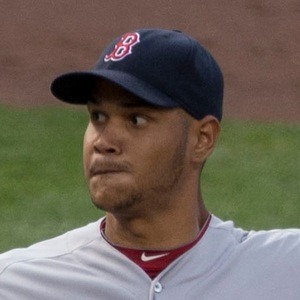 Pitcher who made his MLB debut as a member of the Boston Red Sox in 2015 and has represented Venezuela at the World Baseball Classic. He won the World Series with the Red Sox in 2018.

He became the youngest Red Sox pitcher to win his debut on the road since Billy Rohr in 1967.

He married a woman named Catherine, with whom he has a son named Ian and a daughter named Annie.

He has played alongside Craig Kimbrel on the Red Sox pitching staff.

Eduardo Rodríguez Is A Member Of