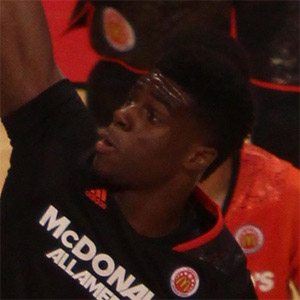 Congolese point guard who was named the second-rated prospect in the country by Rivals.com after a stellar high school career at Grace Preparatory Academy and Prime Prep Academy. He played professionally in China for a season, then was selected 7th overall in the 2015 NBA Draft by the Denver Nuggets. In 2018, he was traded to the New York Knicks.

He and his family moved to the U.S. due to the war-torn conditions of the Congo resulting from the Second Congo War.

After high school, he agreed to a one-year, $1.2 million deal with the Guangdong Southern Tigers in the Chinese Basketball Association in July 2014.

His father died when he was a toddler and his mother grew coffee and vegetables to support the family.

He attended Grace Preparatory Academy with Isaiah Austin, a standout center who was diagnosed with Marfans syndrome shortly before the 2014 NBA Draft.

Emmanuel Mudiay Is A Member Of