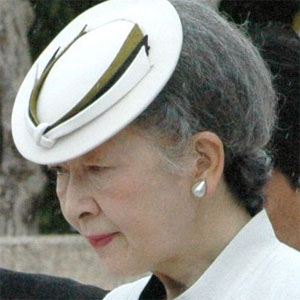 Born into a family of Japanese academics, she joined the Japanese Imperial Family upon her 1959 marriage to Crown Prince Akihito. Upon the death of his father, Akihito became Emperor of Japan and Michiko received the title of Empress Consort.

She studied English literature at the University of the Sacred Heart, Tokyo, graduating with highest honors in 1957.

During her years as Crown Princess and Empress, she was photographed with such famous political figures as United States Senator and Secretary of State Hillary Rodham Clinton, Queen Juliana of the Netherlands, and American First Lady Nancy Reagan.

In the early 1960s, she and Emperor Akihito welcomed two sons (Naruhito, Crown Prince of Japan and Fumihito, Prince Akishino) and one daughter (Sayako, Princess Nori).

Empress Michiko Is A Member Of