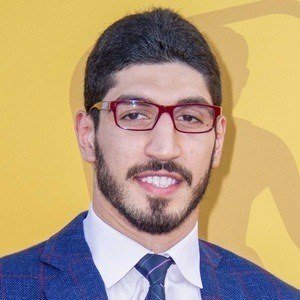 Turkish center who was selected third overall by the Utah Jazz in 2011. He became the team's starting center in 2013, then a 2015 trade sent him to the Oklahoma City Thunder for two years. In 2017, he joined the New York Knicks.

He was offered European contracts at a young age, but declined because he wanted to play high school and college basketball in the United States.

He made his debut for the Turkish national basketball team in the 2008 FIBA Europe Under-16 Championship.

He was born to Mehmet and Gulsum Kanter. His younger brother Kerem is also a basketball player.

In 2012, he began playing alongside point guard Mo Williams on the Utah Jazz.

Enes Kanter Is A Member Of