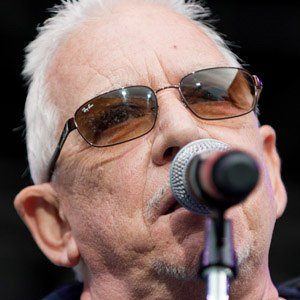 Lead singer of The Animals on "The House of the Rising Sun" who also worked with the funk band War. Known for his passionate stage performances, he is considered to be one of the British Invasion's most iconic signers.

The band's name changed from the Alan Price Combo to the Animals after Burdon's arrival. The first instrument he learned to play was the trombone, but soon moved on to singing.

He is considered one of The 100 Greatest Singers of All Time by Rolling Stone. In 1977, he released his first true solo album, Survivor.

He is a famous funk rock musician much like Mitch Mitchell. He became close friends with Jimi Hendrix before his death in 1970. He and John Lennon were also friends.

Eric Burdon Is A Member Of