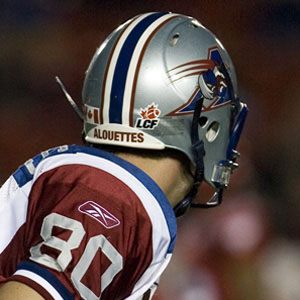 Wide receiver who began his professional career in 2007 for the CFL's Montreal Alouettes.

He attended Eastern Michigan University, where he set school records for receptions, yards, and receiving touchdowns.

Until he attended Eastern Michigan, he had always been a quarterback; but due to too many quarterbacks on the team, he was converted to wideout.

He was born and raised in Gatineau, Quebec.

He is one of Eastern Michigan's most storied football players, along with players like Charlie Batch.

Eric Deslauriers Is A Member Of