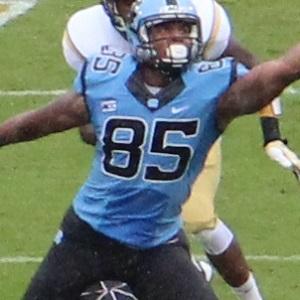 Tight end who was selected tenth overall in the 2014 NFL Draft by the Detroit Lions. He was a 2013 First-Team All-ACC selection at the University of North Carolina and was chosen as a finalist for the John Mackey Award, presented to the best tight end in the nation.

He was a three star recruit coming out of Ben L. Smith High School in Greensboro, North Carolina where he played both defensive end and tight end.

He was born in Newark, New Jersey but attended high school in North Carolina.

He became teammates with star receiver Calvin Johnson on the Lions in 2014.

Eric Ebron Is A Member Of