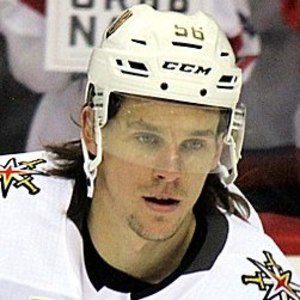 NHL center who was a seventh round pick of the Minnesota Wild in 2009. He made his Wild debut during the 2013-2014 season and was named third star of the game in his very first NHL appearance.

He was drafted after spending a year with the USHL's Omaha Lancers, but proceeded to play three years for the University of Minnesota, where he was a point-per-game player.

He represented his native Finland at the 2014 World Championships, taking home silver.

He was born to Tomi and Minna Haula in Pori, Finland.

He became the second non-North American native to play hockey at the University of Minnesota, joining Thomas Vanek, who would eventually be his teammate on the Wild.

Erik Haula Is A Member Of