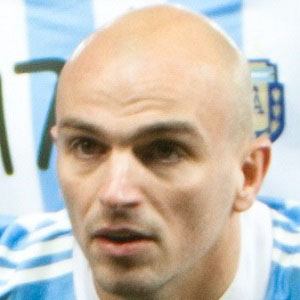 Argentine soccer player who became the winningest player in Argentina's history, having won more than twenty league titles. He has also been a winner for Argentina internationally, capturing titles at the South American Youth Championship and FIFA World Youth Championship.

He was born in Buenos Aires and began playing for Argentinos Juniors in 1995. He made his senior debut for Club Atletico Independiente in Primera Division Argentina in 1998.

He was the twentieth recipient of the Pirata d'Oro award, given to the best Inter Club San Pietro Nerazzurra Seveso player of the year.

He has children named Nicolas and Victoria.He is a descendant of Antonio Cambiaso, who founded the Villa del Parque district in Buenos Aires.

He was teammates with Argentine superstar Lionel Messi at the 2011 Copa America.

Esteban Cambiasso Is A Member Of