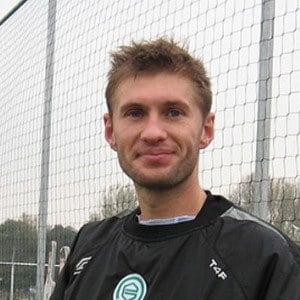 Former professional soccer midfielder who played for over 10 different teams before announcing his retirement in 2012. He went on to break many hearts as the star of the Russian version of the reality series The Bachelor.

He started his pro soccer career with Metalurh Kostiantynivka in 1993.

He played for the Ukrainian national team during a 2002 World Cup qualifier match.

He has a son with actress Victoria Koblenko.

He and Yevhen Konoplyanka both played for the Ukranian national team.

Evgeniy Levchenko Is A Member Of