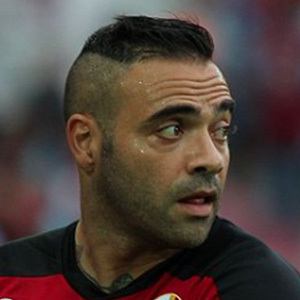 Italian professional football player who is known for playing as a forward and striker on the Birkirkara and Lecce clubs. He is also known for his work as a striker on the Italian national team as well.

He started his career in the Milan academy in 1991 before switching to the Casarano youth club in 1995. His senior career debut came in 1996 when he joined the Casarano senior club. He gained further attention in 2002 when he was picked up by Juventus and the following year he debuted on the Italy national team.

He is known for having been honored as the Top Scorer during the 2002 season in the Coppa Italia.

In 2010, he purchased an earring previously owned by professional football player Diego Maradona.

Fabrizio Miccoli Is A Member Of