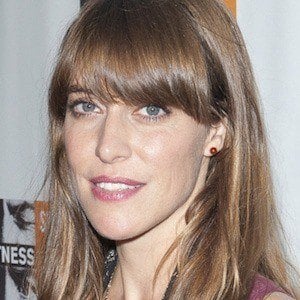 Indie singer who gained critical acclaim for her albums Let it Die and The Reminder. At the 2008 Juno Awards, she took home five awards, including Songwriter of the Year and Artist of the Year.

Born Leslie Feist, she aspired to be a writer and sang in choirs as a child. At the age of twelve she performed as a dancer at the Calgary Winter Olympics. This would later become the inspiration for her "1234" music video.

He music has been featured in popular shows such as Grey's Anatomy, The Inbetweeners, and Parenthood. She wrote "Fire in the Water" for the film The Twilight Saga: Breaking Dawn - Part 2.

She was born in Amherst, Nova Scotia. Both of her parents were artists, with her father working as an abstract expressionist painter and her mother working in ceramics.

She joined Beck, Jamie Lidell, and James Gadson in a cover of "Oar" posted to Beck's website in November 2009.

Feist Is A Member Of