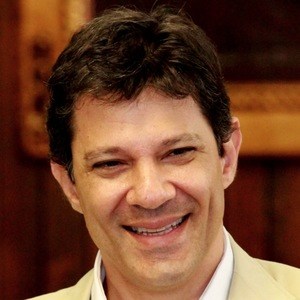 Brazilian politician known for being the 51st Mayor of Sao Paulo. He is also known for having been the Minister of Education and was the running mate of Lula da Silva in the 2018 presidential election.

He earned his Masters Degree in Economics and Doctorate in Philosophy from the University of Sao Paulo. He first took over the position of Minister of Education in July of 2005.

He was featured in an article in The Guardian in August of 2018 when he announced that he would take over for Luiz Inacio Lula da Silva as Brazil's Workers Party candidate for President.

He was born and raised in Sao Paulo and married Ana Estela Hadad.

When he was the Minister of Education, he served under President Dilma Rousseff.

Fernando Haddad Is A Member Of