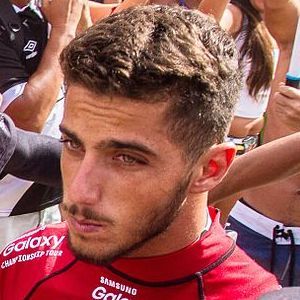 Professional surfer known for competing for the World Surfing League Men's World Tour since 2013. He took gold medals at the Quiksilver Pro Gold Coast and Rio Pro competitions in 2015.

He first began his surf career in junior competitions in 2011, winning titles at the US Open Junior Pro and Billabong Surf Eco Festival.

In addition to his professional surfing career, he's incredibly popular on social media with more than 1 million dedicated followers on Instagram alone.

He is native to Ubatuba, São Paulo, Brazil. He has featured his girlfriend Ananda Marçal on his Instagram account.

Filipe Toledo Is A Member Of