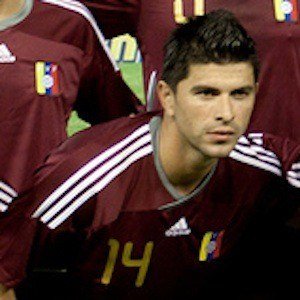 Venezuelan football player who is best known for playing the position of defensive midfielder. He is most recognized for his work playing with the club Portuguesa FC.

With a passion for the sport at a young age, he began playing for the youth club at Portuguesa from 2001 until 2002. Shortly after, he was picked up by Deportivo Táchira where he played from 2002 until 2006. There he appeared in 78 games with a total of 2 goals scored which launched his professional career.

He has performed consistently and has been recognized for his work as a defensive midfielder. He is best known for his international work where he received fourth place in the 2011 Copa America as part of the Venezuelan National Team.

He was born and raised in Acarigua, Venezuela.

As part of the Venezuelan National Team, he can be seen alongside other players for the team including Tomas Rincon and Josef Martinez.

Franklin Lucena Is A Member Of