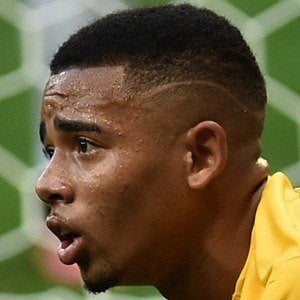 Forward who started his professional career in 2015 with Palmeiras. He played for Manchester City from 2017 to 2022, then landed a long-term contract with Arsenal FC. He represented Brazil at the 2016 Olympics, where he and his team took home the gold medal.

After playing soccer in the streets as a child, his youth career started in 2010 when he began playing for Anhanguera.

He helped Manchester City win four Premier League titles during his six years with the club.

He was born and raised in São Paulo, Brazil. His mother is named Vera Lucia, and he has an older brother.

He played alongside Felipe Anderson at the 2016 Summer Olympics.

Gabriel Jesus Is A Member Of