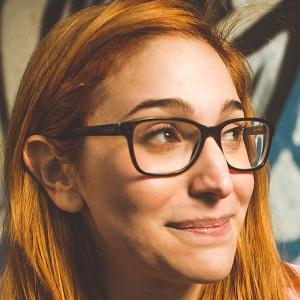 Well known for producing the weekly web series Just Between Us with her best friend and comedy partner Allison Raskin, she is a comedian, journalist and blogger who previously worked for BuzzFeed Video. She and Raskin published a book called Please Send Help... in 2019.

She majored in multimedia journalism at Emerson College, where she began performing with the comedy troupe Chocolate Cake City.

In 2010, her Tumblr blog, 100interviews, was named Best Blog by the Village Voice. She leads the Peoples Improv Theater house team BIRDS and became a producer for WFMU, an independent community radio station.

She grew up alongside her sister Cheyenne in Davie, Florida. Openly lesbian, she dated fellow BuzzFeed writer Stephanie Frosch.

She worked as an intern at The Daily Show with Jon Stewart.

Gaby Dunn Is A Member Of