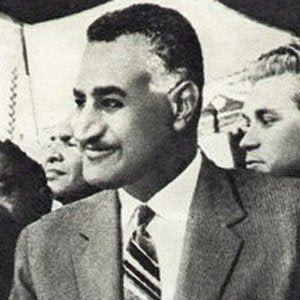 Egyptian president from 1956 to 1970. He tried to unify the Arab states and fought two wars against Israel, all of which made him a revered figure in Arab politics.

A colonel in the Egyptian army, he helped plan and carry out the Egyptian Revolution of 1952, overthrowing the monarchy.

His Pan-Arab politicking made him popular, but Islamists spoke out against his disregard for religion (and were arrested as a result).

He grew up with seven siblings and was descended from the Hejaz people of the western Arabian Peninsula.

Mohammed Morsi, another Egyptian president, also had to contend with Islamism and Arabism.

Gamal Abdel Nasser Is A Member Of