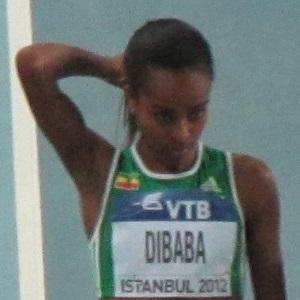 Middle and long-distance runner who competed at the 2012 London Summer Olympics and won the 1500 meters at the 2012 World Indoor Championships.

She broke the Ethiopian record for the 1500 meters competition at the 2012 World Indoor Championships, coming in at 3:57.77 minutes.

She was born into a family of Olympians: her cousin was Olympic 10,000-meters champion and her sisters were silver medalist and gold medalist .

She was born in the village of Bekoji, the same village in which another famed Olympic runner, Kenenisa Bekele, was also born.

Genzebe Dibaba Is A Member Of