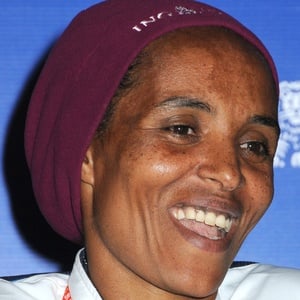 She won the gold medal for the 10,000 meters at the 1990 World Junior Championship in Athletics, which she followed up with her victory over South African Elana Meyer at the 1992 Barcelona Olympics.

She came in first at the 2009 New York City Marathon at the age of 37, beating several luminaries, including Salina Kosgei, Lyudmila Petrova, and arch-rival Paula Radcliffe.

She was born into the prominent and powerful Oromo ethnic group in Ethiopia.

She and fellow Ethiopian Olympian Kenenisa Bekele both grew up in the village of Bekoji.

Derartu Tulu Is A Member Of