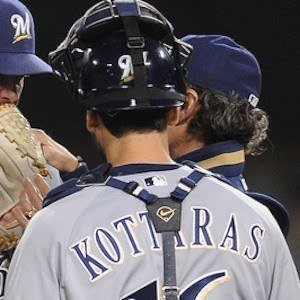 Greek-Canadian catcher who has played for numerous teams since beginning his MLB career in 2008, including the Milwaukee Brewers and Kansas City Royals. He was originally drafted in 2002 after spending one season at Connors State College.

He was born in Scarborough, Ontario and attended Milliken Mills High School.

He played for the Greek national team at the 2004 Summer Olympics.

His parents were born in Greece.

He was teammates with fellow Greek player Mike Moustakas in Kansas City.

George Kottaras Is A Member Of