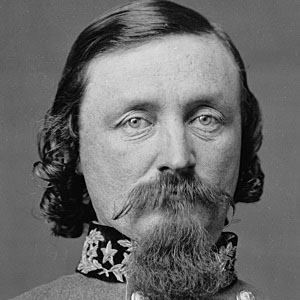 Remembered best as the namesake and leader of the unsuccessful "Pickett's Charge" assault at the Civil War Battle of Gettysburg, this Confederate Army soldier was later defeated at both the Battle of Five Forks and the Battle of Appomattox Courthouse.

After attending the United States Military Academy, he served in the U.S. eighth Infantry Regiment in the Mexican-American War. In 1862, he fought against Union Army soldiers in an early Civil War operation known as the Peninsula Campaign.

Suffering from a liver abscess, he died at the age of fifty.

He and his seven younger siblings were born into a prominent Virginia family. After Pickett's death, his wife, LaSalle Corbell Pickett, published Soldier of the South: General Pickett's War Letters to His Wife and several other works purporting to detail his life and wartime experiences.

He was portrayed by actor Stephen Lang in the 1993 movie Gettysburg.

George Pickett Is A Member Of