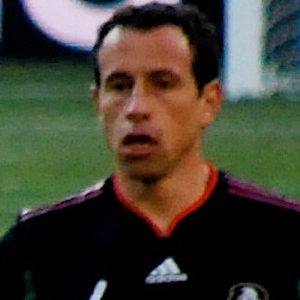 Mexican soccer player known for playing for Cruz Azul. He became team captain in 2006. He has played for the Mexican national team in various FIFA World Cups and was vice-captain of the team for the FIFA World Cup in 2010, which was his last year attending.

He studied and played at Universidad Nacional Autónoma de México beginning in 1997 before heading to play soccer in Spain for several years. He transferred teams frequently, constantly catching the eye of a bigger club, until he was injured and sent home to Mexico. He first represented Mexico internationally in 1999 at the FIFA U-20 World Cup. He became a Cruz Azul player in 2005.

His age became a controversial topic once he hit the age of 35. Younger fans argued that he was growing to old to play, while older fans disagreed. When he was left off the Mexican national team for the FIFA World Cup in 2014 it was a big blow.

He married Regina Torrado and they have a son named Jeronimo.

He joined the Mexican national team the same year as goalkeeper Guillermo Ochoa.

Gerardo Torrado Is A Member Of