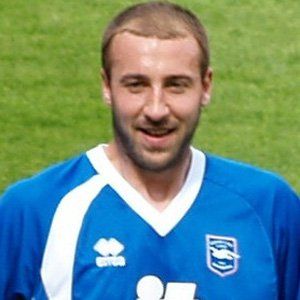 Striker who played for Brighton & Hove Albion F.C. from 2008 to 2011 and later returned to the team in 2017. He was one of Europe's leading goalscorers in 2012, playing for Crystal Palace.

He began his soccer career with the non-League Workinton Reds, before crossing over to the United States to play with the Wilmington (North Carolina) Hammerheads.

His 28 goals in his first 31 appearances in his second season with Crystal Palace helped the team maintain their bid for promotion to the Premiere League.

He was born in Maryport, Cumbria. His wife's name is Stacey.

He played alongside Wilfried Zaha on Crystal Palace from 2011 to 2013.

Glenn Murray Is A Member Of