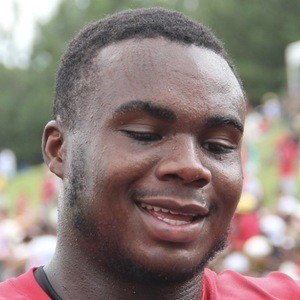 Defensive tackle who began his college career with the Clemson Tigers in 2011. He was an Honorable Mention All-ACC selection in 2012 and 2013.

He attended Rockdale County High School, where he was a two-time All-State selection.

He was a standout wrestler in high school, winning the Georgia State Title in the heavyweight class.

His father, Jessie Tuggle, is a former NFL linebacker who played for the Atlanta Falcons from 1987 to 2000.

He and Daquan Bowers both became star defensive tackles at Clemson University.

Grady Jarrett Is A Member Of