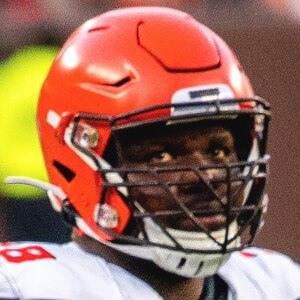 Offensive tackle who was selected second overall in the 2014 NFL Draft by the St. Louis Rams. He had a standout career at Auburn University, earning All-SEC honors in 2013.

He began his career at Thibodaux High School on the defensive line, then transitioned to offense during his junior year.

He helped Auburn win an SEC Championship in 2013.

He was born and raised in Thibodaux, Louisiana.

He became teammates with fellow offensive tackle Jake Long on the Rams in 2014.

Greg Robinson Is A Member Of