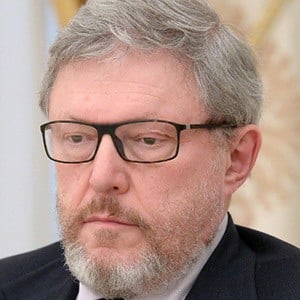 Accomplished politician and economist known for proposing the 500 Days Program to fix the Soviet Union's financial crisis. He ran for the Russian presidency in 1996, 2000 and 2018 as a member of the social-liberal Yabloko party.

He received his PhD in economics from the Central Economic Mathematical Institute of the Russian Academy of Sciences.

He became the champion of the Ukrainian SSR in junior boxing from 1967-68.

His mother Vera was a chemistry teacher and his father Alexei was an officer. He married his wife Elena in 1973. His sons' names are Mikhail and Alexey.

He was defeated by Boris Yeltsin in the 1996 Russian presidential election.

Grigory Yavlinsky Is A Member Of