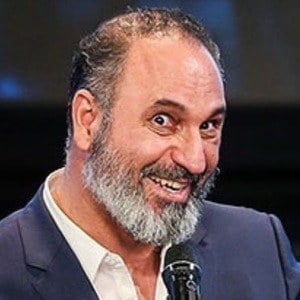 Iranian actor, writer, and director who is best known for his role as Farhan in the 2000 film Aroos-e Atash which he also wrote. He is also known for his role in Tabl-e Bozorg Zir-e Pay-e Chap for which he won the Best Actor award at the Moscow International Film Festival in 2005.

He graduated from the Theatre Director program in Tehran University's Fine Arts Department. He began his career in theater and working on short films. His acting debut came in 1991 when he starred in the film Dar Kooche-haye Eshgh.

He was awarded the Iranian Actor of the Year award by Film Magazine critics in both 2002 and 2003. He is also known for winning the Best Screenplay award for his feature Aroos-e Atash at the Fajr International Film Festival.

He was born and raised in Abadan, Iran and married Foroozan Jalilifar.

He starred alongside Taraneh Alidoosti in the 2006 Iranian drama film Fireworks Wednesday.

Hamid Farrokhnezhad Is A Member Of