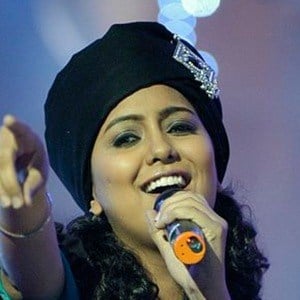 Pop singer whose song "R.I.P." was featured in Danny Boyle's 127 Hours. She won the Mirchi Top 20 Gold Disc Award for Zaalima. She has over 800,000 followers on her harshdeepkaurmusic Instagram account.

The first track she released was entitled  "Sajna Main Haari." It was off her 2003 album Aapko Pehle Bhi Kahin Dekha Hai.

She married Mankeet Singh in 2015.

She performed on MTV Unplugged with Pritam Chakraborty.

Harshdeep Kaur Is A Member Of