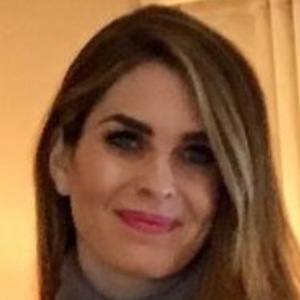 Business executive who was named White House Communications Director in August 2016 under President Donald Trump. She had previously served as his press secretary and communications director for his 2016 campaign, when she was his longest-serving political aide.

She was a fashion model during her childhood years, appearing in campaigns for Ralph Lauren. She would later earn her B.A. from Southern Methodist University in 2010.

She was named to Forbes Magazine's annual 30 under 30 list in January 2017. She has served as founder and CEO of the New York City-based public relations firm Zeno Group.

She has one sister named Mary Grace. Her parents are Paul and Caye.

She succeeded Anthony Scaramucci as the White House Communications Director in August 2017.

Hope Hicks Is A Member Of