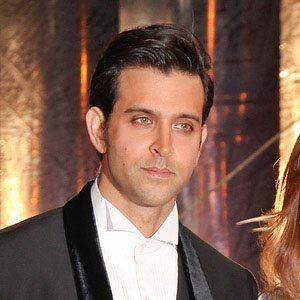 Indian film actor who played the role of Vijay Deenanath Chauhan in the film Agneepath. He also starred in the blockbuster films Kabhi Khushi Kabhie Gham and Fiza. He won a Filmfare Award for Best Actor for his role in Dhoom 2.

He earned a degree in Commerce at Sydenham College. He debuted in Kaho Naa... Pyaar Hai in 2000.

He was a judge on the TV series Just Dance.

His parents are Rakesh and Pinky Roshan. He had two children with Sussane Khan, whom he was married to from 2000 to 2014.

He played the role of Ethan in the film Guzaarish alongside Aishwarya Bachchan.