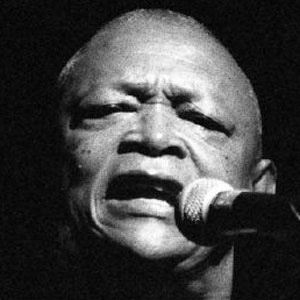 Jazz trumpeter and singer who became known as a member of Johnny Gertze, the first major African jazz group to record an LP. He was nominated for a Grammy Award in 1968. He often times used his music to bring black and white people together.

His first trumpet was a gift from the St. Peter's Secondary School anti-apartheid chaplain Archbishop Trevor Huddleston. He was in the orchestra for "King Kong," the first theatrical musical to experience widespread success in South Africa.

His song "Grazing in the Grass" sold over four million copies in the United States.

He was formerly married to the Grammy Award-winning singer Miriam Makeba. His son is television host Sal Masekela.

He was inspired to learn the trumpet after seeing "Young Man With a Horn," starring Kirk Douglas as a character based on jazz trumpeter Bix Beiderbecke.

Hugh Masekela Is A Member Of